Those three words create a maelstrom of emotions. I know. I was diagnosed with kidney cancer in 2009. 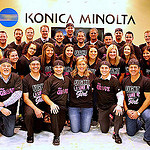 Thanks to a conversation with Michael Leonczyk, who was Konica Minolta’s Chief Financial Officer at the time, I knew that my back pain and other symptoms needed immediate attention, despite the fact that I was getting on a plane in the morning for a family golf vacation. Michael had been battling kidney cancer for three months when I walked in to that Las Vegas emergency room. Doctors would remove my left kidney and a malignant tumor the size of a fist.

Kidney cancer is a pass/fail disease. Caught early enough, it has a 97 percent cure rate. I was lucky. And, this past June, I marked five years of being cancer free. Mike was not lucky. He lost his battle after my diagnosis.

Not a day goes by that I don’t thank him for that conversation back in 2009. I have a different perspective on the world. Having cancer changes what’s important.

Because I know firsthand the fear, the fight, the fortitude of those affected by cancer, I am proud that Konica Minolta is a corporate supporter of cancer events. With October being Breast Cancer Awareness Month, I wanted to share with you some of the initiatives that we support.

On October 3, employees across the country joined the Think Pink campaign, wearing pink shirts, scarves, hats and ties to show their support. You can see our YouTube video here and our Flickr gallery here.

On October 9-12, the company will sponsor the 20th Annual American Airlines Celebrity Golf and Tennis Weekend to benefit the Susan G. Komen Promise Grant to raise awareness of and funding for breast cancer treatment.

And, throughout the year, we applaud the great work of our customer, the M.D. Anderson Cancer Center at the University of Texas, to discover new treatments of all types of cancer, including inflammatory breast cancer. This clinic is the only one of its kind devoted to IBC, an aggressive, rapidly spreading cancer.

I am not the only cancer survivor at Konica Minolta or the only person who has lost someone close to them. On their behalf, I want to say thank you to everyone in the company and across the country who buys a pink ribbon, walks for a cure, or lifts the spirits of someone battling a life-threatening illness.

M.D. Anderson sums it up simply: “The mission of The University of Texas MD Anderson Cancer Center is to eliminate cancer in Texas, the nation, and the world.”

I think that is a mission we can all embrace.

Rick Taylor directs all aspects of company strategy for the U.S., Canada and Mexico, overseeing the day-to-day operation of all corporate business sales and service, as well as marketing, administration, finance, legal and training. Konica Minolta, Inc.’s first non-Japanese executive officer, his vast industry experience includes creating new revenue streams while maintaining a cohesive and productive sales strategy for business partners. Prior to joining Konica Minolta, Taylor served as President and CEO at Toshiba America Business Solutions, Inc. He has been named an “Executive of the Year” eleven times by Marketing Research Consultants and is the recipient of the Friends of Golf’s 2016 Spirit of Giving Award, the Humanitarian of the Year Award from the Mahwah, NJ Regional Chamber of Commerce and the 2018 Lifetime Achievement Award from the Association of Corporate Growth. Taylor is also an Honorary Blue Angels Foundation Board Member.