Print and Digital Communications Are Alive and Well 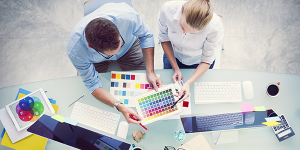 Since 2008, the digital communications industry has been publicizing “Print is Dead.” This quote is an opinion and not fact based. It reminded me of the oft-quoted line by Mark Twain, the great American humorist, when he learned that a major American newspaper had prematurely published his obituary. Upon hearing of this, Twain replied: “The reports of my death are greatly exaggerated.”

I contend that the same can be said of the print communications industry. Yes, it’s changing and, in some cases, drastically. For instance, transactional printing has declined due to digital communications of eBill and eStatements. However, there are some legal issues that still require transactional statements to be printed in hardcopy. In fact, each segment has its own reasons for the continuing need for print.

According to KeyPoint Intelligence (InfoTrends), printing is a $120.2 billion dollar industry. Commercial and production printing shows a 6.8 percent CAGR growth from 2014 – 2019; the publishing segment, which covers books, magazines and periodicals, has rebounded from a flat growth over the last three years. Why? Readers prefer the physical feel and readability of a hardcopy book and magazine over a electronic page image. As humans, we have a love affair with paper.  We like to feel the paper in our hands, the turning of the page and the sound it makes. This is comfort food for readers. The eBook or eZine cannot give the reader the same comfort as a hardcopy can. The educational textbook market has also seen a new rebirth in printed books, workbooks, and course packs over the past three years. Simply, people like the traditional book and magazine.

Wide format printing is a $3.1 billion dollar market in printers, supplies and consumables, media, and service. This technology brings many new advancements in pigment of Aqueous, Latex, Toner, UV-Curable, Solvents coupled with higher printer speeds, and wider and thicker substrates shows a growth in Wide Format printer placements.  Electronic digital signage was thought to take over the traditional printed sign. This has not happened yet. As a matter of fact, Wide and Grand Format signage has appeared more abundantly due to cost and appearance. Have you ever driven down a highway and encountered an electronic billboard that is blinding you? Ever tried to read the fast changing message while driving … taking your eyes off the road. It takes longer to read an electronic message from those digital boards compared to a printed board.  That may change in time as we humans get used to digital messaging.

The Tag & Label Manufacturing Institute (TLMI) states that the Labels and Packaging segment is very healthy and shows growth for the next few years through 2020.  The technologies of conventional flexographic is at $11.1 billion, electrophotographic is at $881 million and inkjet is at $155 million — all totaling $12.1 billion, with projected growth $14.5 billion in 2020.

The number of mobile connections in use grew by a whopping 2.2 billion, meaning that operators activated a net average of almost 14 new subscriptions every second to deliver growth of 37 percent. We’ve only been publishing mobile social media user numbers since January 2015, but users have grown by more than 50 percent in those two years alone. More than 864 million people have started using social platforms via a mobile device in the past 24 months at a rate of almost 14 new users every second.In 2017, annual growth for the internet users is 10 percent, active social media users is 21 percent, unique mobile users is 5 percent, and active mobile social users is 30 percent.

The digital communication vehicle shows significant growth; however, that doesn’t mean that electronic communication will “kill” print. In fact, the opposite has occurred. Due to the growth of digital communications, print has boosted the number of pages and impressions printed. “Print on Demand” is ever stronger, which means shorter run-lengths, more customized and personalized printing, and increasing use of variable data printing.

It’s no secret that printing establishments have consolidated since 2007 and took a big hit in 2008, but the bleeding has stopped. The economics have improved and the industry of printing is alive and well. New print job applications are surfacing every  day. Digital printers and digital printing presses are being sold, revenues for manufacturers are good, and print providers are profitable.

Printing is not dead.  The reports of its death are greatly exaggerated.  And it’ll be with us for generations to come.

Ed Bokuniewicz is a 35-year veteran within the graphic arts industry in the areas of marketing, management, business development, sales and sales support. His prime focus is in print production from Offset & Flexography to Digital Print. Ed joined Konica Minolta in 2017 in the Product Marketing/Management area for Industrial Print and currently has responsibility for the AccurioJet KM-1 solution. He also assists with the Wide Format solutions. He also is an Adjunct Professor at the New York City College of Technology where he teaches undergraduate students about production printing. In his spare time he plays golf, cooks, plays and listens to music, and spends time with his family.