The Secret to a Successful Career 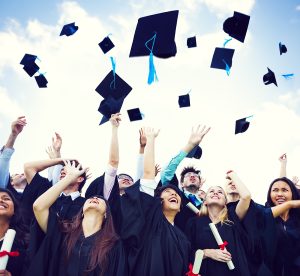 Now is the time for graduations, so I thought I’d take a moment to share with you my version of a commencement address, since I haven’t been asked to give one yet. (Side note to the University of Kansas: I’m available!)

Most addresses exhort graduates to stay true to themselves, to work hard, to follow their dreams and, after a long and happy career, to retire into the sunset. But how do you achieve that? How do you find happiness in what you do?

The answer is actually simple: Do what you love. Yes, that’s obvious if you want to cure cancer and you become a doctor. Or, if you love children and become a teacher. But what if it’s not so obvious? We hear all the time about someone who has done a 180 and walked away from a (sometimes successful) career. Walt Disney was a newspaper artist. Mark Cuban was a computer salesman. J.K. Rowling was a secretary. Obviously, none of them was fulfilled. In fact, Disney’s bosses said he “lacked imagination and had no good ideas.” Seriously.

What all three had in common was the desire to follow their dreams. They knew that editing a story, selling laptops or answering phones didn’t feed their soul. So, Disney moved to Hollywood. Cuban vowed never to work for someone else again. Rowling used her severance to support her family while putting to paper the idea she had about a boy wizard with a crooked scar. And the rest, as they say, is history.

So, how do you know what your destiny is? Well, the obvious answer is to realize what makes you bound out of bed. It may be a 180 from where you are. Or, it may be close to what you’re doing already. Maybe you just need to tweak.

Take Mark Cuban. Right out of college, he was selling computers. But, he was more interested in bringing in new business than working the cash register. His boss fired him because, instead of opening the store, he was networking with a potential customer. Because he was a natural entrepreneur, he began a series of computer and internet startups, selling one to CompuServe for $6 million and another to Yahoo! for $6 billion. Along the way, he’s bought the Dallas Mavericks and earned a chair on “Shark Tank.” All because he loved to create business and was great at it.

As for me, I have a bachelor of science in business administration. I had absolutely no grand plan when I graduated. I simply wanted to work for a company that provided an opportunity for me to grow. I valued reputation, education and future career development above all else. When Xerox and IBM both offered me sales positions, I chose Xerox simply because they would hire me before I graduated and I would be able to begin training and start earning commissions faster. After all, I had student loans to pay!

From the very beginning, I decided to choose experience over compensation when opportunities presented themselves. I looked at my career as a little black box. The more experience I filled the box up with, the more I could charge for companies to look inside!

As I gained more responsibility, I found I really did love this business. I loved the diverse array of companies I could learn from and give value to. I loved leading teams of people organized around common goals. I loved a business that “kept score.” Where winning was possible and people made the difference!

Today’s graduates have much more opportunity than at any time in history. I hope they can all find the satisfaction in their career choices that I have been fortunate enough to find in mine!

Rick Taylor directs all aspects of company strategy for the U.S., Canada and Mexico, overseeing the day-to-day operation of all corporate business sales and service, as well as marketing, administration, finance, legal and training. Konica Minolta, Inc.’s first non-Japanese executive officer, his vast industry experience includes creating new revenue streams while maintaining a cohesive and productive sales strategy for business partners. Prior to joining Konica Minolta, Taylor served as President and CEO at Toshiba America Business Solutions, Inc. He has been named an “Executive of the Year” eleven times by Marketing Research Consultants and is the recipient of the Friends of Golf’s 2016 Spirit of Giving Award, the Humanitarian of the Year Award from the Mahwah, NJ Regional Chamber of Commerce and the 2018 Lifetime Achievement Award from the Association of Corporate Growth. Taylor is also an Honorary Blue Angels Foundation Board Member.