History was made over the weekend at the 2015 Masters as Jordan Spieth became the second-youngest player to wear the green jacket, behind only Tiger Woods’ effort in 1997. The 21-year-old set several records during his command of the PGA tournament. He became only the fifth person to lead the Masters from start to finish. His 28th birdie on the 15th hole made him the first player to reach 19-under-par at Augusta. His halfway total of 14-under-par broke a 39-year-old record and his 16-under for 54 holes was also a course record. This kid’s extraordinary accomplishments caught the eye of the country and the world. 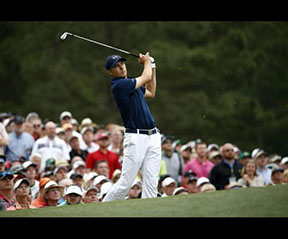 Jordan Spieth hits his tee shot on the 12th hole during the final round of The Masters golf tournament at Augusta National Golf Club. Credit: Rob Schumacher/Rob Schumacher-USA TODAY Sports

It was particularly exciting for those of us in the marketing organization because we recently announced an expansion to our 12-year relationship with CBS sports and the Konica Minolta Swingvision sponsorship to now become the official Multi-Functional Printer of the PGA TOUR.

You might ask how this and our other sports marketing relationships help us in our business. There are several benefits. First is building brand awareness. Despite all of the technology we have today, and in fact because of it, people buy from brands they trust. This goes for businesses and consumers. And golf attracts the greatest number of viewers in our target audience per dollar spent than any sport. In a similar vein, our partnership with Wayne Taylor Racing and the No. 10 Konica Minolta Corvette Daytona Prototype car attracts an even more-concentrated audience of entrepreneurs, top management and business decision-makers as well as the chance to develop relationships with other enterprise account level corporations that participate in racing. Seeing our brand on CBS television, the outfield wall at Angels games or on the race car all helps build the overall awareness of Konica Minolta

The second major benefit is to build customer relationships. In the end, the human-to-human factor is still critical in business relationships. The chances to entertain customers at a race, golf tournament , baseball game or any other of our sports marketing venues gives us the chance to better engage current or potential customers in a more informal environment. Given the tough business environment we are in, these personal relationships can help us win with all other things being equal.

We have won the Brand Keys Customer Loyalty Brand Engagement Index award for 8 straight years, differentiating us from all of our competitors. This year, that honor got us mentioned in Forbes alongside names like Apple and Google. Sports marketing is a core part of our brand strategy. The brand awareness, along with the tremendous work of every one of our employees, are the keys to our success.

Kevin is responsible for setting the direction and strategy to accelerate Konica Minolta’s customer adoption of digital transformation, also overseeing the software and solutions planning functions, including emerging technologies along with oversight of US R&D and Business Intelligence Services (BIS) operations. In previous roles, he drove the BIS and Product Planning organization to ensure the growth and innovation of the company’s technology, solutions, vertical markets and ECM practice, and led corporate marketing initiatives and new product planning and development for Konica Minolta Business Solutions U.S.A., Inc.